Ortho Care for Athletes of All Levels

It’s that time of year again – the sounds of marching bands filled the air last Friday evening as high school football kicked off around the state. Soccer fields and gyms roar with ac­tivity, as do venues for other sports like lacrosse, baseball, tennis and swimming. Many studies show that being active in youth sports has a number of benefits: improved physical health, improved self-esteem, better academic performance, and greater awareness and adherence to healthy lifestyle habits. However, along with those benefits comes the risk of injuries. According to a study conducted by Safe Kids Worldwide, 1.2 million teens and children were seen in emergency rooms for sports-related injuries in 2013.

East Alabama Orthopaedics and Sports Medicine and The Orthopaedic Clinic provide robust programs of services for young athletes, including pro­viding trainers, free of charge, at local and surrounding-area high school sporting events. Injury prevention is an im­portant aspect of high school sports and by providing free trainers at events, injuries are much less likely to go undiag­nosed and untreated.

In addition to providing trainers at high school sporting events, both orthopaedic prac­tices provide a complete spec­trum of sports medicine pro­cedures and treatment. From minimally invasive surgery to innovative rehabilitation, any­thing that is available at some of the most well-known sports medicine clinics in the U.S., is also accessible locally.

Because of experienced phy­sicians, advanced treatment options and the convenience of local treatment, even elite athletes are choosing to stay close to home for all their sports medicine needs. 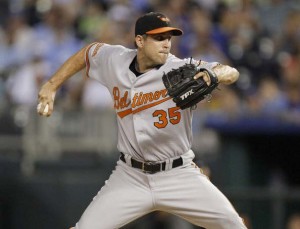 One such athlete is Brad Bergesen, a professional base­ball pitcher, formerly with the Baltimore Orioles and Arizo­na Diamondbacks. Bergeson moved to Auburn several years ago and lives here with his family during the off season. He chose to have an advanced Tommy John surgery at The Orthopaedic Clinic in Opelika. The surgery was performed by Dr. Trent Wilson.

“I had previously traveled to one of the most well-known sports medicine surgeons in the U.S. for a shoulder sur­gery, but received rehab here in Auburn with Steve Kisor at RehabWorks,” Bergesen says. “Between pre- and post-op­eration appointments, I was traveling frequently and it was always hours of wait time. It was inconvenient and I did not have immediate access to my physician if anything went wrong.”

Bergesen explains that throughout the past year he has developed a relationship with The Orthopaedic Clinic and had great confidence in the surgeons there. “I felt no reason to have the full scope of my treatment, from surgery to rehab, performed anywhere else,” Bergesen says.

“I think there are names out there—doctors that people will travel all over the country to go see, but there’s no reason to,” Bergesen says. “The groups here can do the same things, just as well as any of the other great clinics. I had complete confidence in the local physi­cians and physical therapists.”

Bergesen’s Tommy John sur­gery took place about a month ago and he is in the beginning stages of rehabilitation. For players who are interested in returning to the professional level, the recovery process may take as long as 15 – 18 months. Bergesen’s rehabilitation is be­ing administered by Steve Ki­sor at RehabWorks-Auburn.

In addition to innovative procedures like the Tommy John surgery, modern therapy methods, such as dry needling, is also available locally.

Reuben McCoy, a former in­door and outdoor All-American track and field athlete at Auburn University, was diag­nosed with Achilles tendonitis by Dr. Richard “Rick” Horak, a sports medicine physician in practice at East Alabama Or­thopaedics and Sports Medi­cine. McCoy began training professionally in track and field after graduating from Auburn University in 2008. He competes in the 400 meter hurdle event in the U.S. and overseas with the aspiration of competing in the Olympics. In March, he noticed recurring pain in his Achilles that would not go away with standard ic­ing and rest.

“As an athlete we are trained to be extremely aware of our bodies,” McCoy says. “When I began to look for someone to examine my Achilles, I sought out a physician who was expe­rienced with athletes and also knew a lot about the lower ex­tremities of the body.”
“Reuben’s Achilles was thick­ening due to swelling and it was affecting his ability to per­form,” Dr. Horak says. “For an athlete who competes at the Olympic level, swelling would eventually lead to pain that would be disabling. I referred Reuben to the therapists at Re­habWorks where he was treat­ed quickly through non-operative care. We resolved the problem without surgery and he was able to return to train­ing shortly after his therapy.”

McCoy received dry needling therapy from Abby Nielson, a physical therapist at Rehab­Works-Auburn. Nielson ex­plains that dry needling uses the same needles that are used in acupuncture, but the nee­dles are used for a completely different purpose. “In dry nee­dling, the needles are used to create a physiological change in the tissues of the body,” Nielson says. “With something like an Achilles tendon, you can only access the injury from certain angles. But with nee­dles you can get to a treatment depth that you could never ac­cess with just your fingers. For chronic pain, such as Reuben’s Achilles tendonitis, trauma from the needles promotes a healing response within the body.”

“Track and field is all about rhythm and timing,” McCoy explains. “Because of the pain in my Achilles tendon, my step was off. After only one session of dry needling with Abby, my pain was completely gone the next day and I have gradually returned to training. The services provided at East Alabama Orthopaedics and Sports Medicine are as adver­tised. I received my treatment and my case was closed quick­ly because the pain and swell­ing were gone. I was amazed at how quickly the therapy worked since I had been icing the injury myself for months with little change.”

Whether you are a high school athlete, parent of an athlete, or a professional, preventing injuries is a crucial
part of success in an athletic career. The Orthopaedic Clinic and East Alabama Orthopaedics and Sports Medicine are committed to providing young athletes in the community the education and care they need to flourish in their chosen sport. By providing trainers at area sporting events, both clinics are available to athletes from point-of-injury to rehabilitation and recovery.

How to avoid injuries tips for parents and athletes: