Rebuilding the ligament. Most ACL tears end up needing to be fixed to stabilize the knee. To surgically repair the ACL and restore knee stability, the ligament must be reconstructed. Dr. Wilson will replace your torn ligament with a tissue graft. This graft acts as a scaffolding for a new ligament to grow on.

Grafts can be obtained from several sources. Often they are taken from the patellar tendon, which runs between the kneecap and the shinbone. Hamstring tendons at the back of the thigh are a common source of grafts. Oftentimes, cadaver graft (allograft) can be used.  Dr. Wilson has experience with all different graft types and tailors his treatment and graft choice to the patient and their needs.

The middle third of the patellar tendon of the patient, along with a bone plug from the shin and the kneecap is used in the patellar tendon autograft. Occasionally referred to by some surgeons as the “gold standard” for ACL reconstruction, it is often recommended for high-demand athletes and patients whose jobs do not require a significant amount of kneeling.

In studies comparing outcomes of patellar tendon and hamstring autograft ACL reconstruction, the rate of graft failure was lower in the patellar tendon group (1.9 percent versus 4.9 percent). In addition, most studies show equal or better outcomes in terms of postoperative tests for knee laxity (Lachman’s, anterior drawer and instrumented tests) when this graft is compared to others. However, patellar tendon autografts have a greater incidence of postoperative patellofemoral pain (pain behind the kneecap) complaints and other problems. 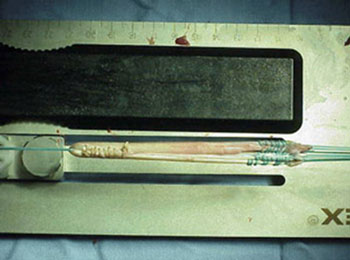 The semitendinosus hamstring tendon on the inner side of the knee is used in creating the hamstring tendon autograft for ACL reconstruction. Occasionally, an additional tendon, the gracilis, which is attached below the knee in the same area is needed. This creates a two- or four-strand tendon graft. Hamstring graft proponents claim there are fewer problems associated with harvesting of the graft compared to the patellar tendon autograft including:

Dr. Wilson has published a technique for a minimally invasive hamstring harvest and believes in this as an option.

Allografts. Allografts are grafts taken from cadavers and are becoming increasingly popular. These grafts are also used for patients who have failed ACL reconstruction before and in surgery to repair or reconstruct more than one knee ligament. Advantages of using allograft tissue include elimination of pain caused by obtaining the graft from the patient, decreased surgery time and smaller incisions. The patellar tendon allograft allows for strong bony fixation in the tibial and femoral bone tunnels with screws.

Prior literature has suggested a higher failure rate with the use of allografts for ACL reconstruction. However, more recent studies have proven that current preparation techniques have made allografts as strong as autografts with equal outcomes.

There are advantages and disadvantages to all graft sources. Dr. Wilson will discuss graft choices with you to help determine which is best for you.

Procedure. Surgery to rebuild an anterior cruciate ligament is done with an arthroscope using small incisions. Arthroscopic surgery is less invasive. The benefits of less invasive techniques include less pain from surgery, less time spent in the hospital, and quicker recovery times.

“All-Inside ACL Reconstruction”.  Dr. Wilson is the only surgeon in the area performing all-inside ACL reconstruction.  This technique has been proven in research to be the most minimally invasive technique available today and has been shown to have the least pain and quickest recovery of any ACL surgical technique.  Click here for more info on this cutting edge technique.

Timing.  The timing of your ACL reconstruction depends on many factors an can range from immediate surgery to being delayed several weeks.  Based on your situation, Dr. Wilson will recommend a time frame and discuss this plan with you.